What is the micro-political significance of Frieze Art Fair’s ‘Nuclear Soup’?

«
This year at Frieze, two artists called the ‘United Brothers’ invited
gallery goers to eat soup made with daikon radishes grown in the
Fukushima area of Japan. The piece was entitled ‘Does This Soup
Taste Ambivalent?’ Although the radishes were ‘potentially radioactive’,
they had been approved by the Japanese Farmers’ Association,
following a food safety test for radioactive cesium. The piece was
sensationalized in the media, with headlines such as ‘Would you eat
Fukushima soup?’ and ‘Nuclear soup’: Japanese duo to serve
Fukushima broth at London art fair’.

The Independent reported that the artist duo ‘believe that food
“represents hospitality, sharing and humanity” so, by partaking in the soup,
the public can show solidarity with the victims of the Fukushima disaster.’
At first glance it is encouraging that London gallery-goers are keen to show
solidarity towards the victims of the Fukushima disaster. But we need to
ask ourselves, what does this gesture of solidarity mean in a micro-political
context in Japan?
Although for many, the gesture of eating the soup was poignant, for others
it became a humorous dare. As reported in The Independent,
Robert Dingle, Contemporary Art Society curator, was asked if he was
worried about consuming the soup. He quipped; “I trust Frieze when
they tell me it is safe…I will keep you posted if I start to develop any
extra limbs.” For many gallery goers,the free soup was happily consumed
within the context of Frieze, and that was that…on to the next stand.
Food safety in Japan is a daily concern for many Japanese people. It has
complex and troubling implication for farmers and residents in the
Fukushima area and beyond. Director of Frieze London,
Jo Stella-Sawicka, stated; ‘The region was devastated by the nuclear
disaster, but people still live there and grow and eat vegetables, which are
authorized by the Japan Farmers’ Union.’ So what does the gesture of
partaking in ‘Does This Soup Taste Ambivalent?’ signify to those who are
trying to rebuild their lives following the disaster?
For Japanese audiences, there are two vital concerns that do not seem to have been
fully addressed either at Frieze or in the British media:
First, that the soup highlights questions of uncertainty and ambivalence. The food has been through a testing process far more rigorous that EU food testing, but audiences still question the safety of the produce. In a recent article in TBS news the chairman of the Fukushima people’s group in the UK expressed concerns that the artists had not provided clear information about food safety in Fukushima. But the artwork is not intending to provide a clear answer to the question ‘is it safe to eat?’ It asks us to think about what it means to ask this question.
Blogger P.T.A.-Part Time Art says of the United Brothers; ‘I feel many people misunderstand their concept….[The artists] don’t say we should eat [the soup], they just want to visualize this ambivalent situation in Japan and make the world know about this problem.’
Artist Ei Arakawa, part of ‘United Brothers’ explains further; ‘I would say 1/5 of the people—the visitors to Frieze— are in a hurry to get along to the next thing. They hear about free soup. They just take a cup of soup. I don’t think they read the information on the wall. I wanted people to read about the risks related to the soup, and to ignite a discussion about the situation.’
The second issue is perhaps less apparent to UK audiences, but directly relates to farmers in East Japan. In an article entitled ‘The Role of Japanese Cooperatives Post Fukushima’ (published earlier this year on foodbank.com) Nicola Wong explains that the Japanese government have strict standards when it comes to radioactive contamination, but that Japanese farmers are relying on cooperatives to provide financial support for the safety tests demanded by the government.   Farmers in Japan are in a complex and precarious political situation, and many people feel that this ultimately requires legislative support from the government to ensure a stable agricultural industry.
The message from Frieze is that international consumers will on occasion, and as a conceptual gesture, support the food production system as it stands. Although this shows general support for Japanese farmers, for many the gesture was too flippant and did not really engage with the crucial issues at stake.
Kaori Homma, Japanese artist and director of Art Action UK, believes that by consuming the soup, gallery goers are indirectly endorsing a subtle shift in a cultural consensus. This consensus; a general unquestioning support for the government’s promotion of Fukushima products, for example through school lunches; reinforces the continued need for farmers to rely on cooperatives rather than direct governmental support. The often-heard expression “Show your support by eating” (tabete ouen – 食べて応援), epitomizes this pervasive, but perhaps simplistic, response to the complexity of the situation. Many people feel the need for more detailed information about the produce they are eating; for greater transparency regarding food safety. It is also important to note that some areas of Fukushima were affected more than others, and even the reference to ‘Fukushima produce’ is a generalization that impacts many farmers from the area.
In the context of Frieze, even though audiences were keen to try the soup, and despite the goodwill shown by their gestures of solidarity, many visitors and media representatives did not sufficiently engage with the nuances of the artwork. As a result the artwork seems to have reinforced doubt about the safety of the food from the region, but has not explicitly outlined the need for greater transparency. The overall reaction of UK audiences has done little to reassure Fukushima farmers.
Nevertheless, the artwork itself is strong and compelling. Arakawa states, ‘I wanted to see the power relation within the certain contexts and try to figure out how we can interrupt, or resist, or somehow transform it.’ The United Brothers are not politicians. Their role is to provoke discourses about food safety in Japan and to highlight the lack of transparency regarding food safety information. However, it is important to bear in mind that as the audience, our responses have collective consequences and we should carefully consider the implications of our actions, even within the art fair environment.

After the tsunami; linking the past, present and future in post-Fukushima Japan

Art Action UK would like to present Komori Haruka and Seo Natsumi’s new film installation, ‘under the wave, on the ground’; a film about memory, recovery and hope following the 2011 earthquake, tsunami and nuclear fallout in Japan. 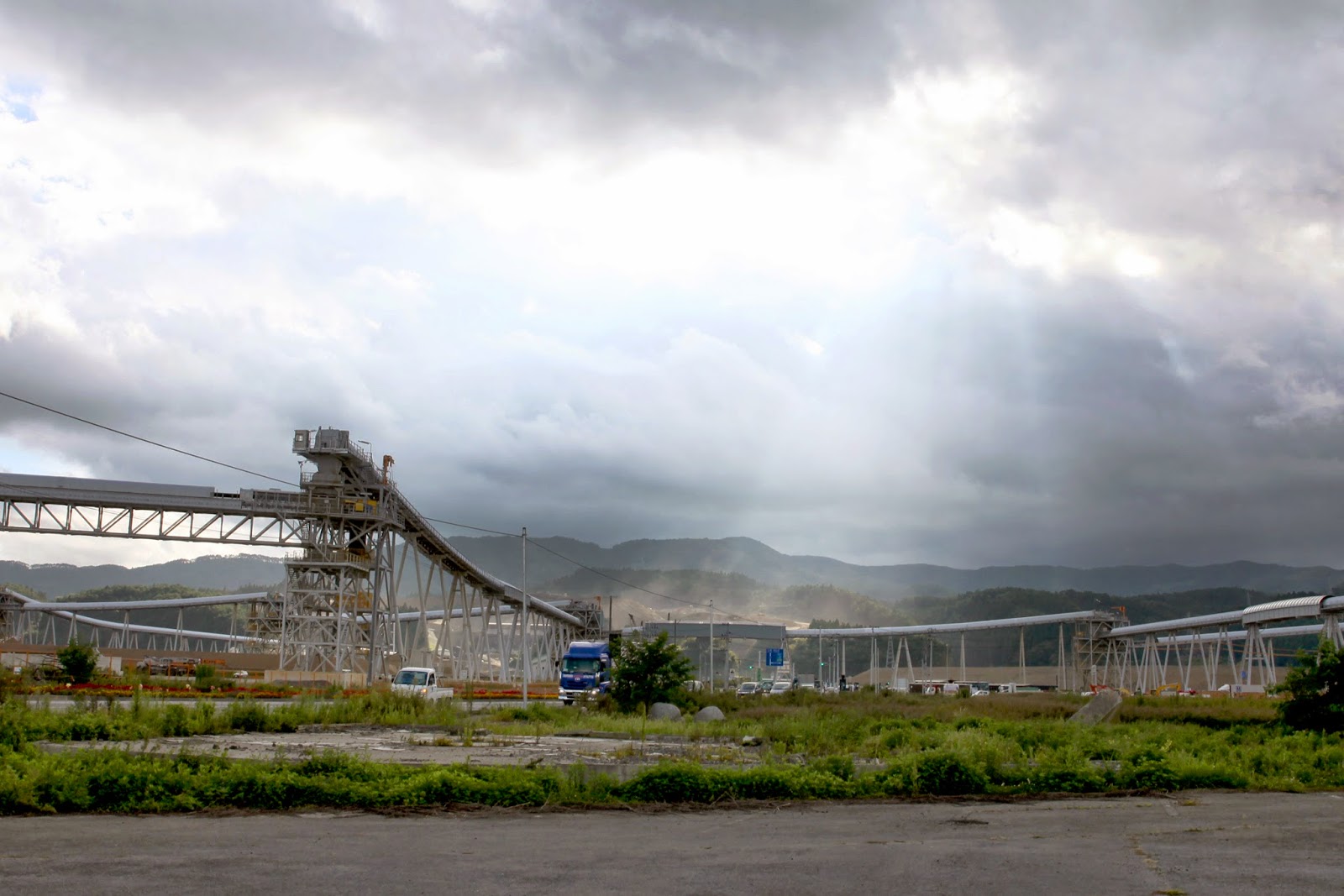 © Komori and Seo, "under the wave, on the ground"
The film follows Abe Hiromi as she returns to the site of her family home in Rikuzentakata City, Iwate Prefecture; a place devastated by the earthquake and tsunami in 2011.  For Abe, remembrance is vital in coming to terms with the disaster and for rebuilding the future.  In the film, she tenderly lays out her parents’ clothes in the warmth of the sunlight, in a gesture of honour and commemoration.  For Komori and Seo, small acts such as this one promise a beautiful future.

‘Under the wave, on the ground’ has a subtle political undercurrent.  It asks us to question the apparent separation of social concerns from political concerns following the disaster.  In Rikuzentakata, the government are spending vast amounts of money removing a section of a nearby mountain in order to redistribute the rubble and raise the level of the land.  At first glance, this courageous and diligent effort reassures us that the city has a promising future.  However, the reality is much more complicated.

Soon after the disaster, those able to attend a local meeting formed a consensus regarding the investment of aid.  Even though the tsunami was 17 meters high, it was decided that the ground was to be raised by 12 meters.  As time has passed local opinion has become more divided between those who have the power and ability to make decisions regarding the development of the city, and those with less influence, who nevertheless have questions about the redevelopment programme.  The media does not cover local issues such as how aid money is to be spent and how the history of the city is documented.  For many residents and survivors, the "positive" actions of the government feel brutal- the ‘top-down’ political process turns a blind eye and deaf ear to the people of the city, who want to link the past to the future, rather than bury it.

Komori and Seo moved to the Tohoku region in 2011 and to Rikuzentakata in 2012 and have been living, working and documenting the lives and feelings of local citizens.  As artists, they are forming a new collective memory in the hope that people in the future will think differently about the way in which disasters such as these can be managed politically.  For many local residents, Komori and Seo are mediators and witnesses in the rebuilding process; they are the eyes, ears and voice of those who feel overlooked by the government.  They are not trying to make a judgement or to point a finger at individuals in political power, but they want people to ask more questions and to be more receptive to the concerns of the residents.

Part of the documenting process is to share these feelings with global audiences.  Seo explains that although their feelings are discounted when it comes to local politics, many residents appreciate the fact that people from other places can hear their voices and empathise.  Above all, the artists want to help those recovering from the tsunami and nuclear fallout to keep their memories alive and sustain a feeling of hope for Japan’s future.
(Text by Jessica Holtaway)

We would like to invite you to see ‘under the wave, on the ground’ at St Paul’s Church, Deptford this weekend; Sat Oct 4th and Sunday October 5th, 2pm-4.30pm.