On the 21st March we will be having a silent art auction at FlatPlanet in aid of setting up a respite residency for young Japanese artists, affected by the 3/11 earthquake and nuclear crisis last year. More information on the invite below or you can check out the facebook page at http://www.facebook.com/#!/events/402560873094748/. We look forward to seeing you there!

Finally some insight into the Fukushima crisis from the British media!! Please check out this documentary that the BBC broadcasted this Thursday. It is available until the 9th April. http://www.bbc.co.uk/iplayer/episode/b01cpd2m/This_World_Inside_the_Meltdown/

Investigative documentary. A look at 2011's tsunami that swamped Japan's Fukushima nuclear plant, making 100,000 people homeless and causing nuclear meltdown and a radiation leak.
International investigative documentary series. When a tsunami struck Japan in 2011, it swamped the Fukushima nuclear complex causing nuclear meltdown and releasing radiation that ultimately would leave hundreds of square miles uninhabitable, and cost a hundred thousand people their homes.
With unique footage and powerful eyewitness testimony from key figures in the drama - the engineers in the plant, firemen, soldiers, pilots, tsunami survivors, the Japanese prime minister and even the MD of the company operating the plant - Inside the Meltdown reveals what really happened in the extraordinary days after the tsunami as a disaster unfolded that Japan's nuclear industry said would never happen.
It tells the story of workers inside the plant's pitch-dark, radio-active reactor buildings desperately trying to stop reactors exploding as radiation levels rose inexorably. 'In the control room people were saying we were finished,' says one. 'They were saying it quietly but they were saying it.' It meets the helicopter pilots who desperately dropped water from above the radioactive cores, and the firemen who braved radiation to spray water onto melting nuclear fuel. 'We chose all the over 40s', their chief tells the programme. 'These were the guys who were not going to be having any more children.'
Inside the Meltdown also reveals the tensions between the plant's owners and an increasingly distrustful Japanese prime minister, struggling to get at the truth of what was happening, fearful the owners planned to abandon the plant. He reveals his experts at one point warned he might need to evacuate vast areas of Japan, even the capital Tokyo. 'That first week, we walked a razor thin line,' he tells This World."
Kaori Homma artaction at 26.2.12

The meltdown and the media

If this is the only hope to find out exactly what is happening now in Fukushima and the rest of the hope for want of a better word... I can only describe things as bleak.
http://www.economist.com/blogs/banyan/2012/01/japans-nuclear-crisis
Kaori Homma artaction at 26.2.12

In November 2011, Kaori Homma returned to Budapest for a solo show at the A38 floating gallery, with support from the Japan Foundation, IPA Foundation
http://cargocollective.com/drhu#/Past-Projects
The event was not only a great personal success for Kaori, it also created another opportunity to raise awareness of the ongoing situation in Japan.
Students from the Hungarian University of Fine Arts enthusiastically sold Meridian Line badges to raise money for the Japanese Red Cross. 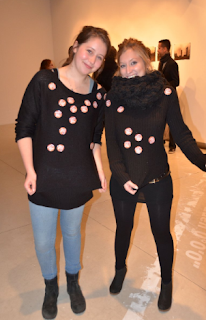 Thank you to all who helped!
Kaori Homma artaction at 23.2.12


The Japanese government has very quietly announced that the Fukushima situation is more serious than previously let out, possibly even worse than Chernobyl. I have read a shocking article stating that the caesium 137 released from Fukushima was equivalent to 168 Hiroshima Bombs. And yet the article was small, and matter of fact. Most worringly, I have not heard many reactions to this major news from any friends or family currently living in Japan.

Though the consequences of this information will inevitably, in the long run, be grave, unlike the Hiroshima Bomb, or even the Tsunami of 11th march, the Fukushima nuclear crisis has not been regarded as a news worthy spectacle.
Kaori Homma artaction at 23.2.12